Please fill in the enquiry form

signed and dated 'Jeff Koons 98'
published by Art of this Century, New York and Paris, with their incised stamp 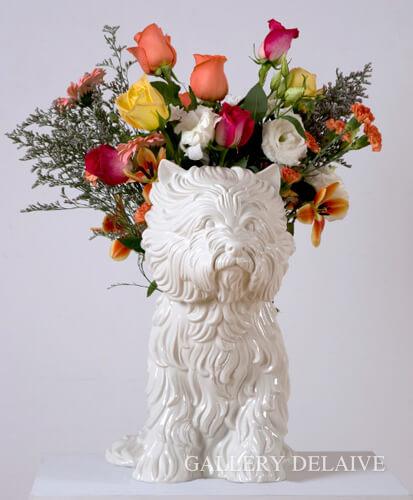 Koons was not among the 44 American artists selected to exhibit his work in Documenta 9 in 1992, but was commissioned by three art dealers to create a piece for nearby Arolsen Castle in Bad Arolsen, Germany. The result was Puppy, a 43ft (13m) tall topiary sculpture of a West Highland White Terrier puppy, executed in a variety of flowers (including Marigolds, Begonias, Impatiens, Petunias, and Lobelias) on a transparent colour-coated chrome stainless steel substructure. In 1995, the sculpture was dismantled and re-erected at the Museum of Contemporary Art on Sydney Harbour on a new, more permanent, stainless steel armature with an internal irrigation system. While the Arolsen Puppy had 20 000 plants, the Sydney version held around 60 000.

The piece was purchased in 1997 by the Solomon R. Guggenheim Foundation and installed on the terrace outside the Guggenheim Museum Bilbao. Before the dedication at the museum, an Euskadi Ta Askatasuna (ETA) trio disguised as gardeners attempted to plant explosive-filled flowerpots near the sculpture,[39] but was foiled by Basque police officer Jose Maria Aguirre, who then was shot dead by ETA members. Currently the square in which the statue is placed bears the name of Aguirre. In the summer of 2000, the statue traveled to New York City for a temporary exhibition at Rockefeller Center.

In 1998, a miniature version of Puppy was released as a white glazed porcelain vase, in an edition of 3000.